3rd and Lindsley, Nashville:
"Jim Hoke's magnificent Aqua Velvet Orchestra, received thunderous ovations from the audience at their premier performance of “Exotic Sounds In Country Music” right here at 3rd & Lindsley...
Now this sensational, pop orchestra, comprised of a collection of the finest musicians in Music City, returns with MORE "Exotic Sounds In Country Music"   and MORE of Jim Hoke's spectacularly thick, orchestral arrangements of some of Country Music's most beloved and classic songs.  Woodwinds, pedal steel, a string section and world instruments plus Kristi Rose singing.
Beyond Countrypolitan. Beyond Description.  You don’t want to miss Aqua Velvet." 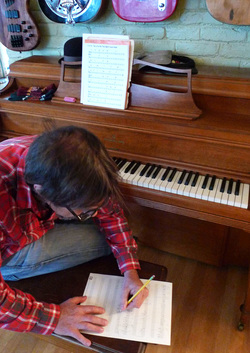 photo L. Haddad
Craig Havighurst of Music City Roots:
"...I’m on the phone with master musician Jim Hoke, getting some background on his vintage suave band Aqua Velvet... Hoke created this small orchestra a decade ago with multi-instrumentalist Randy Leago to re-imagine standards and important tunes in fun, filmic ways. I’m especially interested in the wild harmonies Hoke discovers and adds to familiar songs, so that’s what I’m asking him about, on the phone.

Aqua Velvet “gives me a chance to stretch my chord muscles and put in chords that are associated with other kinds of music,” he says... “Like in ‘Jolene’ I use poly-chords.” And suddenly he’s playing these thick rich tone clusters on a piano over the phone!

"...the new Aqua Velvet recording and show concept called Exotic Sounds In Country Music. With friend of the show Kristi Rose singing the commanding, brassy vocals (staying true to the original melody), the band swells and swirls with flutes, vibes, strings and percussion on songs like “Oh Lonesome Me” and “Back In Baby’s Arms.” Tempos are changed, sometimes radically. This is what arrangers do, and Hoke, who has played more instruments for more artists and more styles of music in Music City’s live and studio settings than perhaps anyone (no exaggerating), is among the best.

"Though mainly a recording band, Aqua Velvet emerges from the studio a handful of times a year to thrill their loyal listeners with shows that usually carry a certain theme. The transcendent  vocals of Kristi Rose add to the  legendary status of their "all Bacharach" shows. Most popular is their annual Christmas show which requires ever larger venues each year; not just for the size of the audience, but for the ever-increasing number of instruments enlisted..."

Randy Fox of The Nashville Scene:
"For several years, the Aquavelvet Christmas Spectaculars have been an annual spiced cocktail of holiday favorites from Nashville’s top post-Atomic Age orchestral pop collective. Now the merry band of glistening strings and horns has turned its attention to the great hillbilly songbook through Exotic Sounds in Country Music. Multi-instrumental maestro Jim Hoke and vocalist Kristi Rose head a 10-piece mini-orchestra that has brushed up country classics and brought them into the bachelor pad through lush arrangements that sparkle under the warm glow of the lava lamp. Slip into your best sharkskin suit or slinky evening gown — and please, check your cowboy hats at the door. " 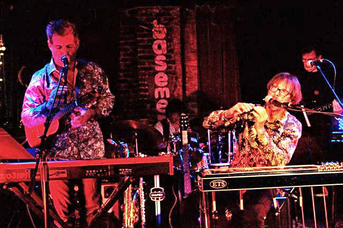 photo L.Haddad
Joe Wolfe-Mazeres of No Depression:
"Aqua Velvet has billed its last two shows at 3rd and Lindsley as “Exotic Sounds in Country Music,” and while the words “exotic” and “country music” are not very often used in the same sentence, the description fit the night’s music perfectly.
Arranged and directed by the versatile session musician Jim Hoke, Aqua Velvet is the kind of band that could exist in very few places on the planet other than Nashville, Tennessee. In addition to the expected instrumentation -- guitar, bass, drums, harmonica, pedal steel -- the 10-piece band included a violin (not a fiddle) and a cello, flutes, clarinets, saxophones, a mouth harp, and more. Powerhouse vocalist Kristie Rose handled the singing duties, and it is hard to imagine another vocalist better suited for the job.
The sound was great, the songs were classics, the band -- made of some of the best Nashville session players around) was impeccable, and as previously mentioned, Kristie Rose was incredible; however, without a doubt, the star of the show were Hoke's masterful arrangements.
The opening four numbers -- Don Gibson’s “Oh Lonesome Me,” “Lonely Street” (originally performed by Andy Williams), “Strange” (penned by Fred Burch and Mel Tillis, and originally recorded by Patsy Cline), and the Dorsey Burnette song “Hey Little One” -- were a perfect showcase for the talent, and a preparation for what was to come.  When Rose left the stage, the band delivered an inspired, instrumental version of the Cowboy classic, “Ghost Riders in the Sky,” which was written by Stan Jones in 1948.
Rose returned to the stage. and what followed was one of the most impressive moments of the whole show: Aqua Velvet performed “Folsom Prison Blues” in a way that Johnny Cash could have never foreseen. It was gorgeous, at times torchy, and yes, it was exotic. The appreciative, enthusiastic, knowledgeable Nashville crowd were visibly in awe of this unexpected, brilliant arrangement.
“Wayward Wind,” which was a 1956 hit for Gogi Grant, Leroy Van Dyke’s “Walk on By,” and Jack Scott’s “What in the World’s Come Over You,” were gorgeously arranged and transformed. Then, much of the band left the stage and Hoke, guitarist John England, and Dave Francis gathered at center stage to play the Sons of the Pioneer’s “Blue Prairie.”
The set ended with a powerful version of Dolly Parton’s “Jolene” and “Ashes of Love,” a traditional bluegrass number. The latter song, which is usually upbeat was transformed  by Hoke into what he described as a dirge.
The band left the stage and returned to close out the night with a stunning performance of “Ode to Billy Joe.” Once again, Hoke’s exotic arrangement, played to near-perfection by some of Nashville’s finest, was spectacular. But it was Kristie Rose’s virtuoso vocal performance that brought down the house. After she sang the last line, Rose exited the stage, confident that her work was done.

Merry Aqua Velvet finale with special guests, at 3rd and Lindsley
Jim Ridley of The Nashville Scene:
"Typically, Randy Leago and Jim Hoke’s lounge-music reclamation project, Aqua Velvet, sounds like the audio equivalent of Ewan McGregor’s swanky space-age bachelor pad in the ’60s retro-throwback comedy Down With Love — music designed to revolve a heart-shaped bed. But judging from the tracks we’ve heard, their new project, Exotic Sounds in Country Music, plays down the Esquivel atmospherics somewhat and puts the focus on mainstay vocalist Kristi Rose’s torchy delivery, her heart-in-throat vibrato and kiss-me-deadly drops into her lower register. The result transforms honky-tonk standards such as “Oh Lonesome Me” and “Folsom Prison Blues” into sultry cabaret suitable for a film-noir soundtrack (or for the roadhouse jukebox in that coming Twin Peaks update). Get there early, as their performance in June was SRO."